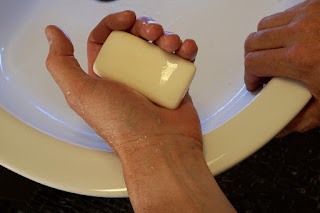 Despite being medicated, having gone through therapy and many different alternatives, to say that I am free and clear of OCD would be a lie. This is a reality most people suffering from mental illness have to deal with. It isn’t like a cold that you may get over and over again, recovering in a couple weeks. It's with you everyday. We try to find tools to be able to manage our thoughts and feelings to get through it and make it as easy on us as possible.

The thing is there's a silver lining to dealing with the illness’ that we have been given. In some respect or another it has given us skills others have not honed because they were not put or forced into a position where they had to. I developed a photographic memory by having to remember exactly where people would touch if I thought their hands were "dirty." I would avoid these spots and when somebody would ask me about it, I was giving exact timelines and locations of where and why they were contaminated to me. Naturally it is unhealthy for my illness, but when it came to school it was a skill that became extremely helpful and allowed me to be a little relaxed when it came to note taking. Definitely not a good habit. It did give me the ability to actually be engaged in the classroom and really pay attention to the teacher rather than focusing on whether I got everything written down.

That's the positive I take away from my mental illness and I am grateful for it. I think being able to expose these qualities would be extremely helpful for one on one workers or individuals working with clients. This would motivate individuals to recognize the positive aspects of their condition. It's one thing to tell someone to think about everything outside of the illness to make them feel better, but to make the illness positive as well, then you’ll start to achieve something greater than acceptance. It could become an effective tool in treatment and also give the individuals an eye opening experience that may take some stress off always feeling like the world is against you. What do I know right? I don’t have a degree in psychology and I'm not a certified therapist, but I have been through the system since I was a little kid, which has shown me what works and what doesn’t.

One of the greatest helpers that I had at the hospital never allowed me to believe I was different. He enforced that I had qualities others weren’t in touch with, which made me the way I am, and he was right. It was the perfect way of explaining why I was acting the way I was, without telling me "you have a problem" or "you’re different, here’s a cocktail of pills to make you normal." The thing is he made me feel included and that is what we as mental illness individuals as a whole, wish for. Not to be given "special" treatment, but to be understood that sometimes we may need some more time or a little bit of help. We will get to the same place others are going we just might take the scenic route instead.